Bhutan is a paradise for bird lovers and ornithologists. Over 670 species of birds have been recorded and much more are yet to be discovered. Around 50 species of the known birds are winter migrants. These include ducks, waders, birds of prey, thrushes, finches, and buntings. 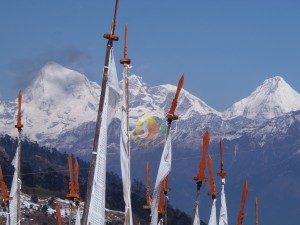 After breakfast at the hotel, 15 minutes drive from here will take you to the parking lot at the base of the Tiger’s Nest monastery, from here you can hike to one of the most beautiful and holiest temples in Bhutan. As Bhutan’s most scenic icon and most important destination for pilgrimages and reflection for over 1200 years, Takshang (or the “Tiger’s Nest”) clings to the side of a steep cliff some 200 meters above the Paro valley.

The place was first visited by Guru Rimpoche, founder of the tantric form of Buddhism in Himalayan countries, in the 8th century. It was said that he meditated there for about three months. After him, many high Buddhist priests came to meditate at this location and attained the highest level of spirituality. The original temple was built in the 17th century, but tragically, it was consumed by fire in 1998. Like a phoenix, the temple was rebuilt to its fullest glory in 2003. Takshang is considered to be the 10th-holiest site in the Buddhist world.

The total hike will take the average person about four hours. From the parking area, it will take about one hour to the tea house (rest and refreshment provided) and then another one and a half hours to the temple. Then in the evening drive to Thimphu, the capital city of Bhutan. The drive will take about an hour and a half.

Early morning drive to Punakha over the Dochula Pass (3150). Our day starts from this pass with the breathtaking views of eastern Himalayas ranges. The mixed forests of hemlock, fir, oaks, and rhododendron here are good habitat for many good species including, Fire-tailed Myzornis, White-throated, Spotted and Striated Laughingthrushes, Oriental, Indian, and Large Hawk Cuckoos and Rufous-gorgeted Flycatcher. Afternoon: Visit Punakha Dzong we’ll visit impressive Punakha Dzong suppose to be one of the most beautiful dzong in Bhutan. After finish visiting the Dzong drive along the Po-chu River looking for White-bellied Heron, Pallas’s Fish Eagle and other shores birds.

You will spend the whole day birding inside the Jigme Dorji National park and along Mo chu River. We have the possibilities of seeing Red-headed Trogon, Wallcreeper, Slaty-bellied Tesia, Small and Large Niltava, Black-chinned Yuhinas, a trio of forktails, Pygmy and Spotted Wren-babblers, Woodpeckers, Laughingthrushes, and with luck White-bellied Heron and Pallas’s Fish Eagle. Along the drive to Trongsa along the drive, we’ll also be looking for the species like Speckled Wood Pigeon, Ultramarine Flycatcher, Golden-breasted and White-browed and Rufous-winged Fulvetta, Streak-breasted and Rusty-cheeked Scimitar Babbler. Black-winged Cuckoo Shrike, Yellow-rumped Honeyguide, Nepal House Martin, Blyth’s Swift and White-throated Needletail, Black Eagle and many more. Today on our drive to Zhemgang, we will have lots of stops at several-forested valleys, the species you’ll for looking for along the drive are Rusty-cheeked Scimitar Babbler, White-browed Scimitar Babbler, Streak-breasted Scimitar Babbler, Grey-bellied Tesia, Crested Bunting, Spot-winged Starling, Long-tailed Shrike, Black-throated and Hill Prinia, Rufous Woodpecker, Sultan Tit, Yellow-cheeked Tit, Common Green Magpie, Rufous-bellied Eagle, Mountain Hawk Eagle, Common Kestrel, Blue-capped Rock-thrush and various minivets. Just to name the few. This is also our best chance for the Golden Langur, a rare monkey endemic to Bhutan and only discovered in the 1950s.

After your final morning birding, we will work our way back to Trongsa, looking along the way for the species we might have missed before.

After crossing Yotongla will bring you to the Chumey valley in Bumthang. Bumthang is famous for its distinctive woolen weaves, known as yathra. At the village of Zugney you will see the fine samples of yathra hanging by the roadside. The weavers all women can be seen at their looms beside the road. The road continues over the Kikila pass to enter the next valley in Bumthang (Jakar) the district headquarters,

Later in the evening, we will be birding around Sengor looking for Satyr Tragopan. Sengor is known as the hotspot for Satyr Tragopan. Other birds you’ll be looking out here include Bar-winged and Scaly-breasted Wren Babbler, Gold-naped Finch, Hoary-throated Barwing, Bar-throated and Red-tailed Minlas, Whistler’s and Grey-hooded Warbler and Slender-billed Scimitar Babbler. In the evening you’ll also try for the Himalayan Owl, which comes around your campsite.

Before breakfast, we’ll once again drive toward Thrumshinla pass to try for the Blood Pheasant and Satyr Tragopan.

We spend the two full days birding the upper and lower Limithang road. This Yongkala-Limithang road has been touted as one of the best birding sites in Asia road as it allows the birder an opportunity to access the wide varieties of Habitats from the pristine broad-leaved to the coniferous forest that spans across a vast altitudinal range. All this is protected within the Thrumshing La National Park.

After a final morning birding in this wonderful habitat, we head toward Trashigang with several stops along the forested road looking for the Himalayan Bulbul, Black-tailed Crake, Crimson Sunbird, Common Green Magpie, Stop at Korila pass. Here the forest is rich in mosses and lichens. Birds we may be likely to see here are Streak-breasted Scimitar Babblers, Grey-winged Blackbird, Hoary-throated Barwing, Long-tailed Minivet, Crested Bunting, Bhutan, Scaly and Blue-winged Laughingthrushes.

In the evening free time to explore town of Trashigang, one of the main trading center in eastern Bhutan

Today we continue our journey to Morong passing through lofty forests and rhododendron-filled valleys with several birding stops along the way in areas of lush, verdant, montane forest. Some of the desirable species that we will be on the lookout for this morning include the much sought-after Ward’s Trogon, Golden-naped Finch, Rufous-breasted Accentor, Blue-winged and White-throated Laughingthrushes.

In the late morning, you’ll pass through the place called Khaling where we have National Handloom Development Project, supported by the National Women Association of Bhutan to train the young girls from different parts of the country. Here you will see the woven kiras, table runners, and scarves,

Continue our journey through a series of forested area stop along the way for the species we have missed.

Later in the evening we’ll spend time birding around Morng looking for the species like Rufous-necked Hornbill, Silver-eared Mesia, Scarlet Finch and every effort will be made to look for Beautiful Nuthatch,

After early breakfast at the camp, we’ll be heading to a lower elevation than we have been able to visit so far on the trip. We’ll target the varieties of low elevation specialties including Pied Falconet, the extremely rare Dark-rumped Swift, Pin-tailed Green Pigeon, Sultan Tit, Black-backed Forktail, Red-headed Trogon, Black Eagle, House Sparrow (rare in Bhutan…), several species of Cuckoo, Jungle Babbler, Grey-sided Laughingthrush and many more.

Today you journey takes you through the Indian plain of Assam, where the wildlife of these plains is totally different from the Himalayas. The species we may see on the drive are Little Cormorant, Indian Pond Heron, Egrets, Black Ibis, Black Drongo, we will also keep our eyes for very rare species like Lesser and Greater Adjutants.